Relaxing and Adventures on Tioman Island, Malaysia. Tioman Island is paradise – and you can reach it within a 3 hour journey from Singapore or Kuala Lumpur.

We arranged a private taxi through our resort to pick us up from our hotel in Singapore and drop us to Mersing Port, where the ferries to Tioman are. This was expensive at 600 RM one-way but we wanted to relax and felt it would be easier than taking the bus.

The public bus departs from the main bus station in Singapore. The bus will take you to the border. At the border, you have to disembark, go through customs and then catch another bus the rest of the way to Mersing.

Whether you decide to take a taxi or bus, ensure you leave plenty of time as the traffic in Singapore and around the boarder is infamous. We left at 6.30am and ended up being in plenty of time for our ferry at 11.30am but we preferred to err on the side of caution.

Mersing Port and the ferry

The port itself is fairly grim. Although there are plenty of eateries and some small grocery shops, I would recommend bringing your own lunch. All goods are sold at an inflated price – we had to pay over the odds for a small tube of after sun.

You will need to pay port taxes of 25 RM per person in addition to buying your ticket. About 45 mins prior to departure, you have to queue up with your passport and your ticket to register.

Seats are pre-allocated on your ticket although we found the process to be more “first come first served”. The ferry stops at various places on the island. If you are heading for resorts like Minang Cove or Tuna Maya, you will disembark at Genting. 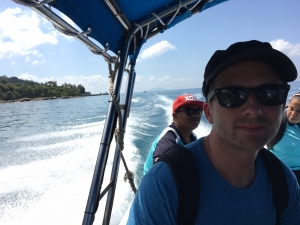 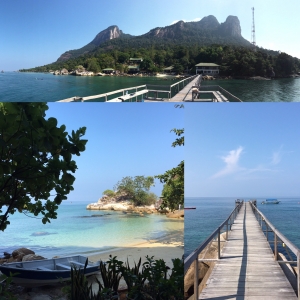 We chose Minang Cove because the reviews were excellent and the price compared favourably to many of the other resorts. We would recommend the resort 100% – it was one of the most relaxing holidays we have ever had. 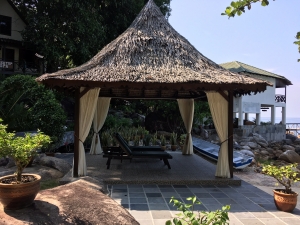 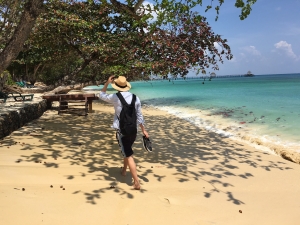 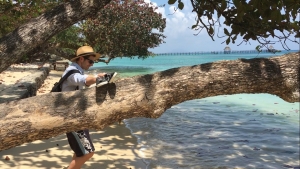 The staff were impeccable – very friendly and obliging.

The food seemed to follow a rotation but we were there for 10 nights and only had the same thing once.

On sea food night you are served a whole fish, similar to a sea bass, in addition to all of the other dishes on the buffet. The other nights included Malay, Thai, Chinese and Indian. 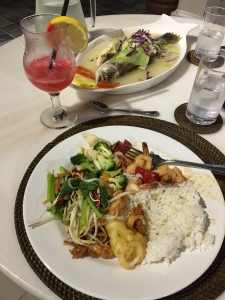 Breakfast and dinner are included in the price but lunch is extra. At around 4pm, the staff serve iced tea and snacks such as doughnuts, chocolate cake, banana fritters, fish pasties etc.

We had some fried rice dishes for lunch which were great but if you can hang on until the free afternoon tea, you don’t really need lunch.

There is a daily happy hour (between 6-7.30 ish), though the reductions are fairly small.

The rooms were comfortable and clean but admittedly a little rustic – if you are looking for luxury, Minang might not be for you.

The communal areas were lovely and it had a bit of a community feel to it, rather than feeling like you were on a big resort.

We walked over to Bagus and Tuna Maya to check out those resorts and thought that Minang was much nicer. 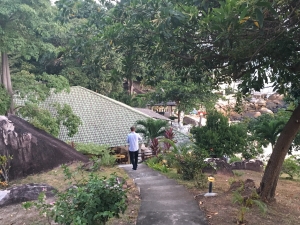 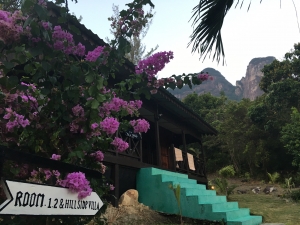 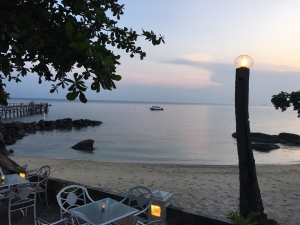 The cove has a little beach and a lovely sun deck area. We did quite a lot of snorkeling. You can rent equipment for 90RM for 3 or more days but we brought our own. There are also lots of snorkeling and diving trips that you can do.

We saw a turtle, lots of colourful fish and the amazing coral (though much of it near to the beach has died). The jetty goes further out into the ocean and we used to launch from there rather than struggle to get out through the shallower water. We were told that from about 4pm is a good time for fish spotting and we saw the turtle about 5pm.

The jetty is the source of a lot of action – fish feeding reef sharks in the evening after dinner and the perfect place to watch the sunset and see the stars come out. We saw some fantastic constellations, Jupiter and even a couple of shooting stars!

There are a few mossies, so bring repellent. However, we did not see any sand flies as the staff sweep the beach daily. 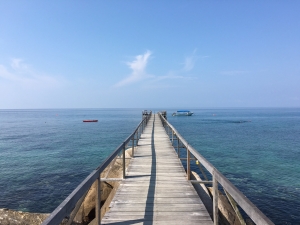 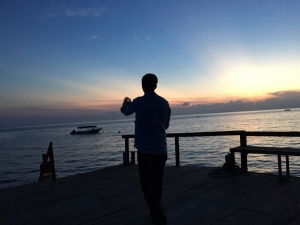 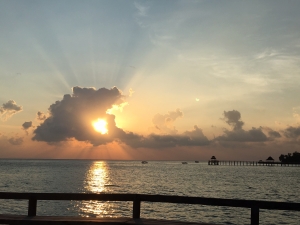 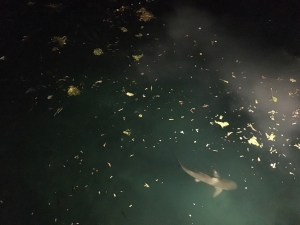 We also did a walk to Mukut Village and the Asah waterfall. We were told that this would take is 1.5 hours but it was more like 2 hours (although we did stop a lot to take pictures).

Along the way we saw 3 deserted beaches, chatted to some villagers and bought an ice cream from a friendly local.

The walk is easy, along a mostly concrete path but it was incredibly hot. However, you can cool off at the waterfall, which is deep enough to swim in.

If you are quiet you can also see some of the wildlife – we spotted monkeys, a monitor lizard and lots of butterflies! 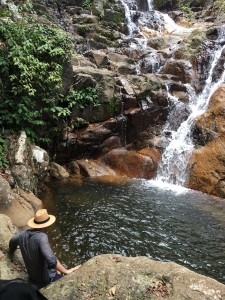 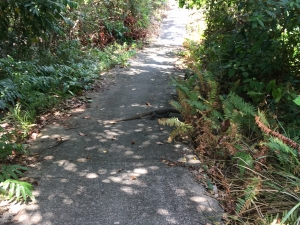 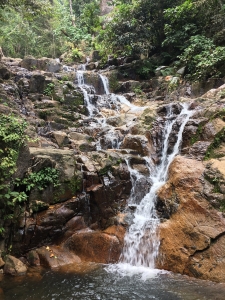 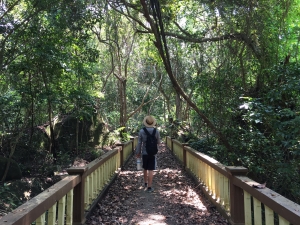 I would highly recommend visiting Malaysia and Tioman Island, we had the holiday of a lifetime. When we are sitting in cold rainy England, often reminisce about sitting on the jetty with a cold wine watching the sunset!

If you’re travelling to Singapore….

Check out my Singapore and Sentosa blog

Watch my VIDEO of Singapore zoo